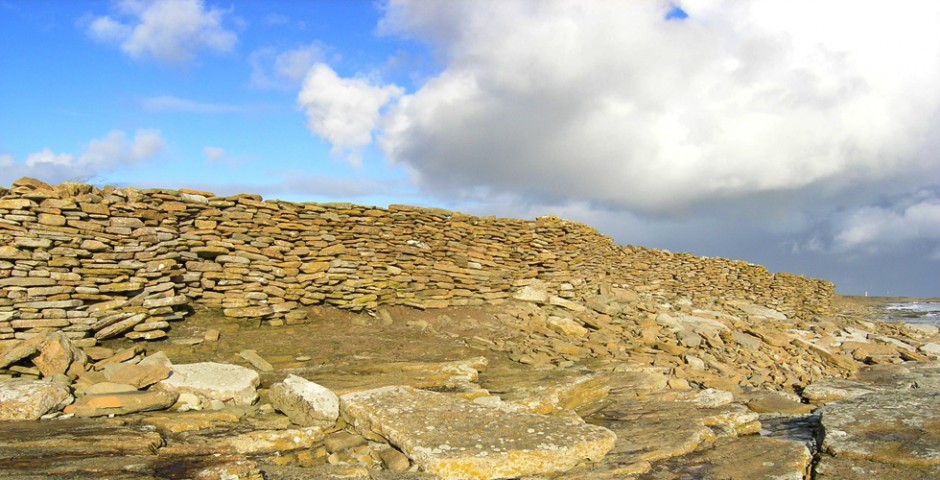 The sheep dyke developed as part of a solution to the economic crisis that followed the collapse of Orkney’s kelp industry.

Kelp was formed by the slow burning of dried laminaria seaweed. It was burned in round pits by the shore and the output was a hard lumpy residue, rich in potash and soda and shipped south to the glass, soap and dye factories of industrial Britain.

A boom developed in Orkney when wars disrupted the import of rival sources of kelp from Spain and from North America. First came the American War of Independence and then the Napoleonic Wars, and the 50 years from 1780 to 1830 saw the kelp boom, when landowners made fortunes, and everyone possible was deployed on the task of harvesting seaweed and making kelp.

At times during that period North Ronaldsay was producing as much as one-tenth of Orkney’s kelp, and the island population rose from 384 in 1787 to 522 in 1831.

But the boom years came to an end in 1830 with the removal of tariff protection against imported alternatives and the Orkney industry collapsed.

This was an emergency for North Ronaldsay, with many more people in the island than could be fed.

“But the islanders, already well inured to hardship, were in once sense fortunate, in having a laird, who in addition to being ‘a masterful man’ was also a man well accustomed to deal with emergencies. Most of the Woodwick and North Ronaldsay Traills had at some period of their lives held important administrative posts in India, and this particular member of the family was no exception.”

The laird, John Traill, came up with a radical strategy to save the situation. He looked to agriculture as a solution. The surplus labour would be deployed onto carrying out improvements on the land to enable the island’s agricultural output to expand substantially.

This was the time when new ideas were developing further south for ways of increasing output through approaches such as field improvements and crop rotation.

Under the old run-rig system, the various types of land, better and worse, had been shared out amongst everyone in long strips. The system left land uncultivated between the rigs and drainage was often a problem.

The solution was to ‘square’ the land – to amalgamate the various groups of rigs into single fields.

So a big operation was got under way to reallocate the land, drain the field, and build enclosure-dykes, with North Ronaldsay ahead of most of the rest of Orkney in the changes and soon finding the benefits.

“The introduction of land-squaring resulted in fewer but larger crofts where the fields could be enclosed by dykes or fences. It also called for a better rotation of crops, with the growing of rye-grass and turnips for the winter feeding of the cattle. The search for other ways of making more use of the island’s natural resources also brought up the idea that the native sheep, already supplementing their diet with seaweed, might be conditioned to live entirely on what they could find on the beaches and foreshores. The surplus labour released by the post-Napoleonic slump in kelp was, therefore, set to work to heighten and close the gaps in the surrounding wall, most of which had already been built a long time earlier.”

The squaring of the land was completed in 1832 as well.

The impact of the sheep dyke on agricultural production was immense. The total area of the shore is just 271 acres of sand and rock – but it feeds over 2,000 sheep.

The structure of the dyke

The dyke was planned and constructed with much care, with features including the nine ‘punds’ for gathering sheep, five main ones and four supplementary.

“Both the age and the quality of masonry of the dyke varies greatly. Some of it is very old, while other parts like the section known as the ‘moonlight dyke’ and some of the outer field-dykes at Dennis Ness and Twinyas are of more recent construction. Built with the sort of stones that lie to hand, it ranges from round sea-polished ones to great boulders that required the combined effort of as many as a dozen men to lift into position. 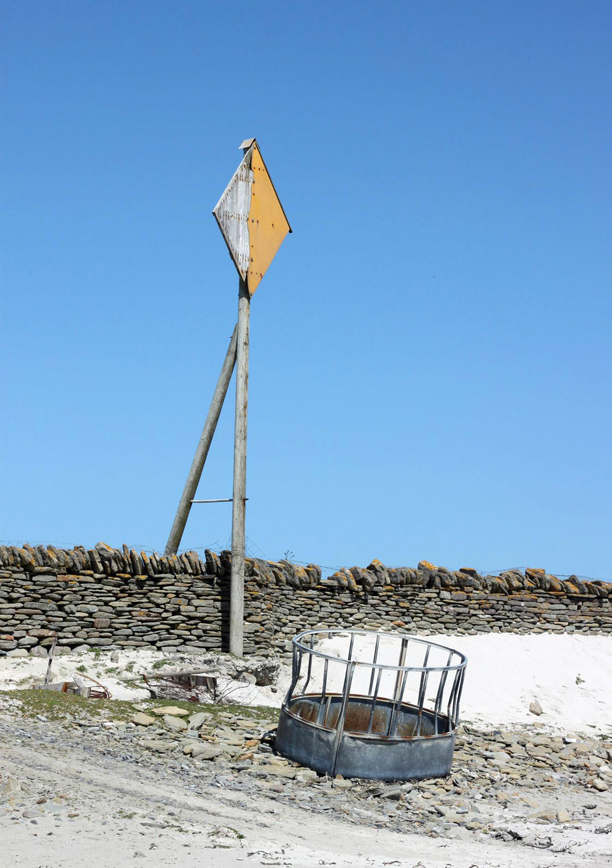 “On the whole it seems to be reasonably well suited to the ground on which it is built. A sandy foundation is matched with a lightly-constructed wall with numerous window-like openings to prevent wind pressure building up and flattening it. On the other hand, sections which have to act as a rampart for houses located near the high-water mark are generally substantially constructed, and may even be dove-tailed into the rock. Another intriguing aspect is the manner in which the dyke thrusts seawards, or bends back leaving a fairly wide margin.”

(Peter A. Tulloch, A Window on North Ronaldsay)

“At certain points in the dyke there are stone fanks, cleverly designed with narrow passages leading into them, and off-centre openings, which trick the sheep inside, so that they can be caught. When the tide is full the sheep are easier to manoeuvre, because there is less of the shore for them to run on. The rocks are covered by the sea, so that the sheep are prevented from going out on to the ebb. There are grassy high walled quoys, or parks, along the inside of the dyke, and the ewes are lifted over the wall into them, and are soon eating grass. The old sheepmen were not short on ancient wisdom, for in certain parts of the dykes there are wide lintel stones, just high enough to let a sheep through at ground level. The packed stones are removed from below the lintel, the sheep put through, and the dyke built up again.”