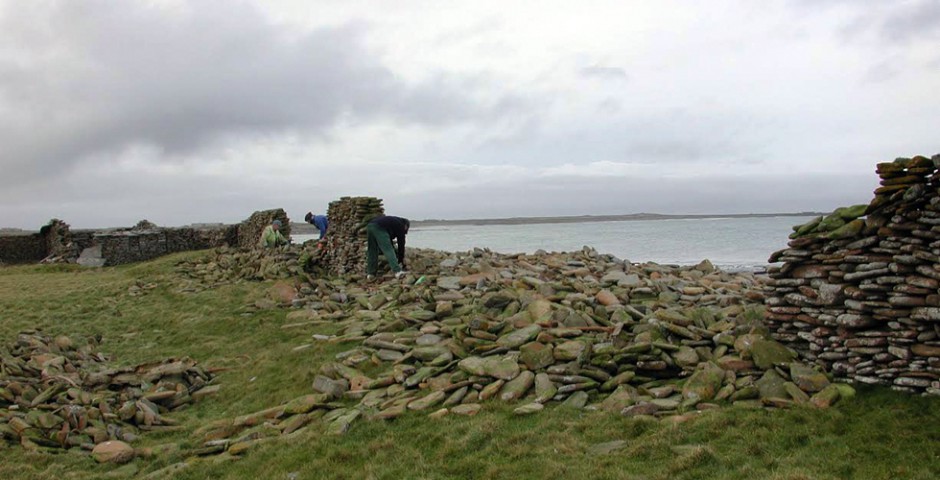 In post-War years the outer islands of Orkney experienced population decline, as people moved to other communities for opportunities, some to the cities and some to Canada or Australia. It was part of an outward tide from various outlying communities in Scotland, where limited amenities and employment led people to move.

Gradually Orkney found the resources to enable it to invest in island communities, helped by funding from the central government and from the arrival of North Sea oil in the 1970s. The drift away form the outer islands has stopped, and a new movement in the other direction has developed.

This change in trend is coming just in time for North Ronaldsay where the population, once unsustainably high at over 550, has fallen to around 60. A small number of able-bodied islanders has been coping with the maintenance of the 12 miles of sheep dyke and steadily working away together to build up some stretches which the sea has taken down.

The scale of damage that they have had to cope with is immense. During December 2012 and January 2013 the island was hit by fierce storms and rip tides – the worst in 40 years and several miles of the sheep dyke were laid low.

But the dyke repair has continued. Signs of the challenge can be seen, and some stretches of the dyke which have been completely destroyed by the sea have been replaced by temporary fencing. Repair here will depend on major construction work to put in new foundations.

In other parts, sections of the dyke that are structurally sound are close to being undermined by erosion from the sea and construction work will again be needed to provide protection.

Volunteers from outside the island have provided help on various occasions, their presence and work a big morale-builder for the people of the island. But overall it has become clear that the only way to safeguard the dyke is for a long-term programme to be brought together, mobilising resources to tackle the areas where foundation work is needed, and thereby enable the dyke to be maintained and rebuilt in the traditional way that has continued for the best part of two centuries.