“Larks are high in the sky every day, sometimes almost out of sight, yet their song carries a long way. Peewits and whaups cry across the loch from the rough grass, and out on the skerry the seals are calling.”

The sight and sounds of the birds through the seasons are part of the tapestry of island life in Christine Muir’s Orkney Days. There are the fulmars on the shore, skimming the sand with an outstretched wing, curlews raking the fields for food, ducks splashing and diving on the little lochs, an owl on a fence post.

In addition to its native birds, the island is a stepping-stone on migration routes, providing an opportunity for food and rest before the next leg over the journey over sea. The migrating birds have a choice of many types of habitat – from the small freshwater lochs to the shelter of the sycamores and fuchsias in the gardens of Holland House.

Winds from the east and west 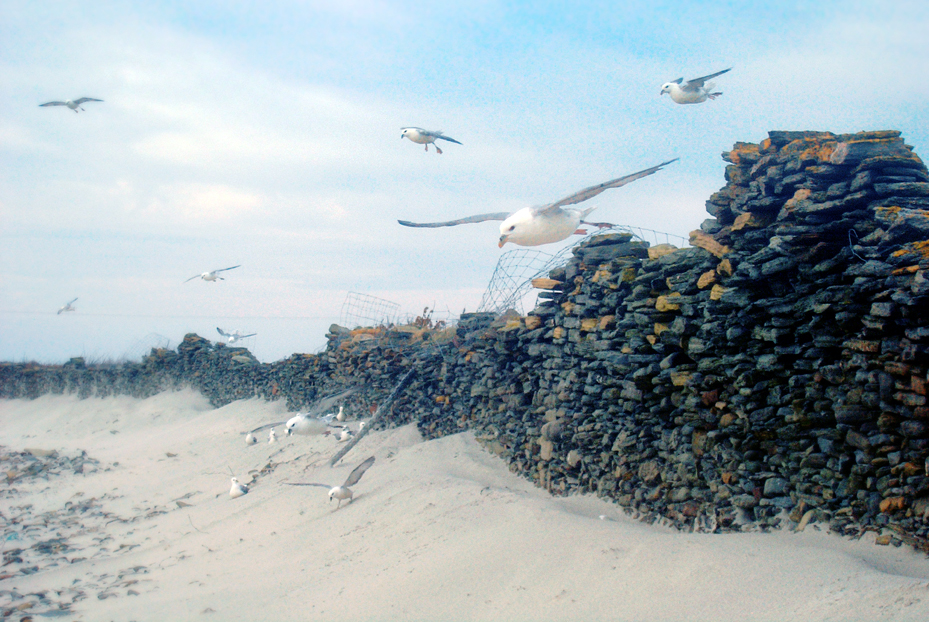 As well as the regular seasonal visitors, there are also migrants from other routes, blown off course by the weather, such as Bluethroats, Red-backed Shrikes, Common Rosefinches and Icterine Warblers. Strong westerly winds can bring in American birds such as the Veery or the American Golden Plover. One of the latter was ringed, and turned up later in Italy, having headed south as it would have done in its native continent. And easterly winds can bring in birds that breed in Russia and winter in southern Asia, like the Yellow-Browed Warbler or the Olive-Backed Pipit, or the Pechora Pipit which breeds in the Arctic tundra and winters in Indonesia.

The island has its bird observatory, established in 1987 by the island’s doctor, Kevin Woodbridge, together with Adrian Cawthorne, who worked for the British Trust for Ornithology. Adrian died young, and the observatory is dedicated to his memory. It is a low-energy building with modern facilities, providing accommodation and meals of local produce as well as carrying out a range of work in recording, ringing and training.

The observatory’s website describes the island bird year, from the spring migration in March:

“The first Sandwich Terns should be returning, and very large gatherings of Oystercatchers occur at this time. The beginnings of spring passerine migration become evident as the first Meadow Pipits and Pied Wagtails arrive. Large numbers of Skylarks can pass through, and small numbers of other migrants such as Robins, finches, thrushes and Dunnocks start to appear. By the end of the month, the first Wheatears and Chiffchaffs might have turned up. Stonechats and Hawfinches are scarce, but this is probably the best time of year to look for them.”

There is information too on the website of Scotland’s Bird Club, with a detailed article on birdwatching in North Ronaldsay by the naturalist Martin Gray who lived on the island for many years.