Since the completion of the work on the sheep dyke in 1832, the sheep have been confined to the shore and to a diet that is almost completely seaweed. The main seaweed is laminaria, with long stalks or stipes that grip to rock with a holdfast, and leathery brown fronds that spread out in the water.

Laminaria are commonly called kelp, and in older times were burned to make the valuable kelp ash that was sold for industry. In later years, the stipes or tangles were dried and ship away to factories extracting alginates – sugar-fibres used in the food and pharmaceutical industries. The waters around Orkney are rich in this type of seaweed.

”The strong tidal flow, excellent aeration and the clarity of the water provide growing conditions which encourage the growth of a dense submarine laminaria forest. The inhabitants of Lady Parish, Sanday, considered that tangles cast up on the north coast and originating in the rougher water of the North Ronaldsay Firth were firmer in texture and made a kelp superior to that which was obtained from tangles on the south shore.” 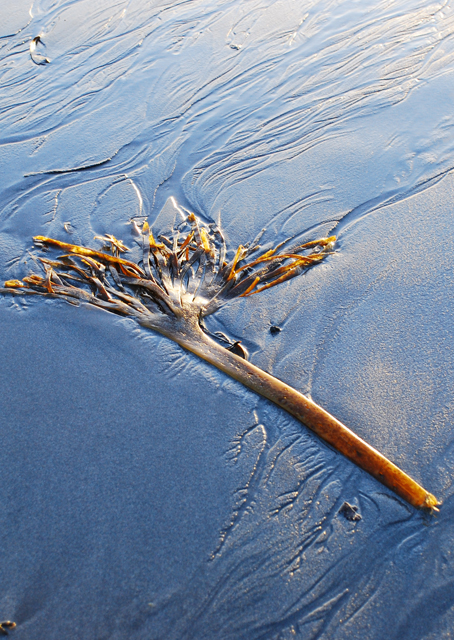 The kelp is lower down the shore, starting a little above low water mark and extending out into deeper water. Winter gales tear huge quantities from the sea bed and cast them up on the beaches, a bonanza for the sheep. The sheep are at their prime weight in December.

At other times of the year, they have to maximise their opportunities to access the laminaria, and have become highly proficient in this.

“Once the tide begins to ebb and leave a row of stranded seaweed at the high-water mark, the sound of the retreating wavelets acts as if it were a sheep’s alarm clock. Their spell of sleep, rest, and cud-chewing, which has lasted since about half-flood-tide, is over. Intermittent foraging then goes on until the next half-flood-tide signals the time for further rest and sleep.

”During the feeding time, most of the flock will follow the falling tide-line, trying to outdo one another in being the first to reach the crisp blades of ware as they rise above the water. Some of the fitter and stronger specimens may even swim to an outflow in order to have a better choice of seaweed. To establish their claim this small herd will then combine to ‘doose’ or butt-off any other sheep who try to dispute their territory.”
(Peter A. Tulloch, A Window on North Ronaldsay, 1974) 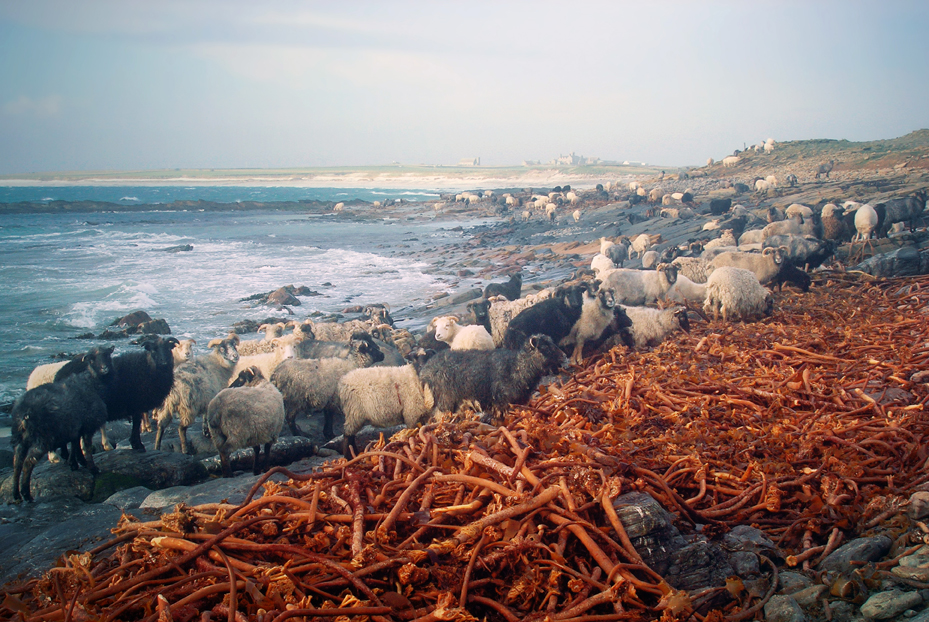 The seaweed is nutritious. North isles vet William Carstairs, for many years adviser to North Ronaldsay’s Sheep Court, had an analysis made which showed a protein level of 15%, and appreciable quantities of many trace elements including calcium, phosphorus, magnesium, sodium, potassium, copper, manganese, and zinc.

”This shows that seaweed is a valuable food, having a good protein fraction compared to fibre. 4 lbs seaweed per day will give a basic maintenance diet.”
(The Orcadian, 11 March 1976)

The physiology of the sheep has changed to enable them to digest seaweed thoroughly and benefit from it to the fullest.

”Laminaria are plants, like grass, but instead of storing their energy source as starch (as in green plants) they store it as laminarin. Different enzymes are needed in the gut to break this down to glucose, the building block of starch and the chemical which can be absorbed into the blood stream and used by the sheep. In the rumen of sheep this breakdown is done mainly by bacteria. In other words, in less than 200 years the whole digestive process of the sheep and its rumen bacteria have undergone a complete change.”
(Elizabeth Lovick, A North Ronaldsay Yarn: The Sheep, their Wool and their Island, 2004)

While increased levels of salt in their diet does not harm the sheep (they drink from natural free water seepages and pools around the coast), a consequence of eating so much seaweed is that they do take in a large amount of iodine.

”This is present in abnormally high concentrations in both the blood and the milk of ewes. And this is thought to be the reason why they are so resistant to diseases such as mastitis (an infection of the teats during milk production) and foot rot (another bacterial infection which can be the bane of a sheep farmer’s life!)”
(Elizabeth Lovick, A North Ronaldsay Yarn)

The iodine adds to the taste of the meat, which is low in fat, since the sheep store fat around their internal organs. The meat is also rich in minerals from the seaweed.

An energetic marketing drive from the island has seen the meat reach various top restaurants in London and elsewhere, as a delicacy for connoisseurs. It is also on the menu at several leading Orkney restaurants and hotels, and available through outlets in Orkney and online. Advice for preparing it is to cook it very slowly.

The sheep are free to move around the shore but have their own preferences.

”In general the sheep tend to stick to their own part of the beach, which is known as their clowgang (Old Norse klaufa gangr, tramp of cattle, from klaufa, cloven footed animal + gangr, a walking), a word elsewhere applied to the pasture-land or sheep-walk of a township, or to a township’s group of sheep, which kept by themselves in moving from one area of pasture to another.”
Alexander Fenton, The Northern Isles: Orkney and Shetland, 1978)