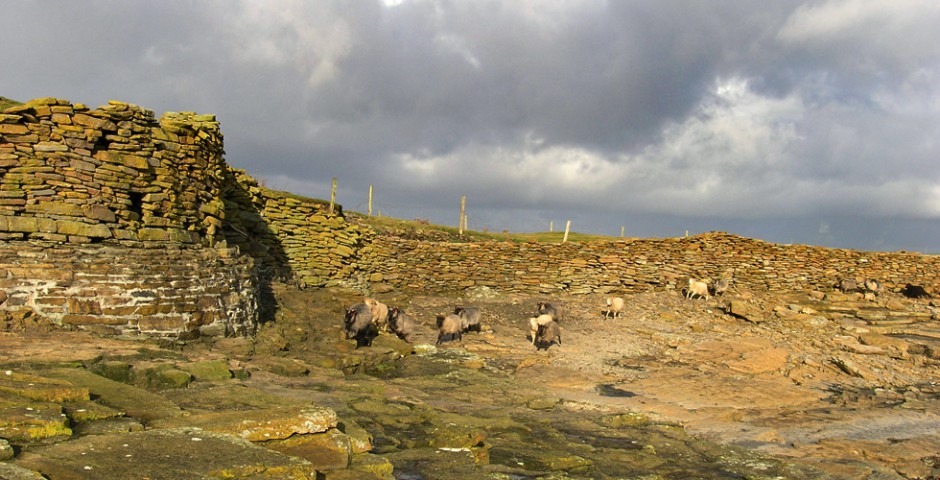 The dyke is regarded by Historic Scotland as ’probably the largest drystone construction conceived of as a single entity in the world’. It is over 12 miles in length, and stands some two metres high – enough to deter a ‘louper’ (jumping sheep).

It is listed Grade A by Historic Scotland and highlighted in the Buildings At Risk Register for Scotland.

It was completed in 1832 to confine the native sheep to the foreshore and so protect the cultivated land and crops from their wanderings.

At its inception, the population of the island provided sufficient manpower to undertake a project on this scale, especially since traditional kelp gathering and burning was in decline and gave rise to ‘spare hands’.

Once built, the dyke required regular attention to be an effective barrier. The rules of the island’s Sheep Court therefore laid down procedures for sharing the responsibilities and tasks of maintaining the integrity of the dyke upon which the existence of the native sheep relied. This tried and tested system sufficed for many generations and the sheep dyke stood proudly as a symbol of vision and enterprise.

In more recent times, however, its fortunes have changed dramatically.

During December 2012 and January 2013 the island was hit by fierce storms and rip tides – the worst in 40 years – and substantial damage was done to the sheep dyke. Several miles of the structure were laid low and the depleted island population faces a mammoth task. The damaged dyke faces the recurring and relentless challenge of the sea and its current state requires major reconstruction. At the same time, the island faces the additional challenges of an ageing and reducing population which puts the physical task beyond the current capacity of the islanders, both physically and financially.

The community is working hard on regeneration and welcoming new islanders and has pressed forward energetically with various developments for the future. Support for the repair and restoration of the sheep dyke will not only conserve a remarkable historic structure and an internationally significant ancient breed; it will also ensure the survival of the traditional system of community flock management that has preserved sheep and dyke for so long.

THE DYKE BEFORE AND AFTER STORM