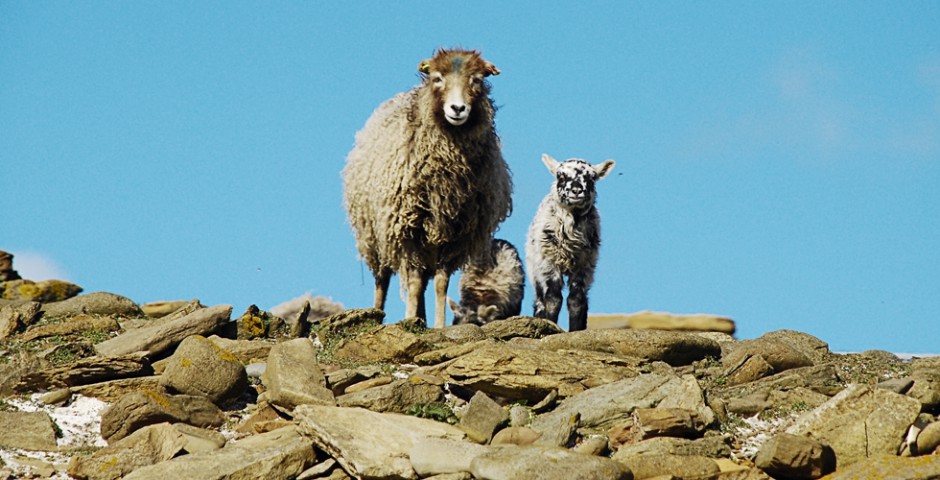 These are an ancient breed of sheep – small, hardy and short-tailed – and managed under a communal shepherding system. Confined to the seashore by the drystone dyke encircling the island, they survive on a diet of seaweed to which they have become adapted.

They are part of the family of short-tailed sheep found in various parts of northern Europe and on some of the Atlantic islands.

The importance of these sheep to the island economy and their key role in the cultural development of North Ronaldsay is underlined by events during the 1830s, an important and life-changing decade in North Ronaldsay during which major social change took place.

It was a time when the old pattern of land management was beginning to change, with the formation of the modern field system and of new methods of managing the island crofts. This opened up new opportunities to grow crops and keep cattle, and to bring in bigger breeds of sheep such as Cheviots and Leicesters.

On many islands the native sheep did not survive this ‘modernisation’ and were discarded. But in North Ronaldsay a way was found to adopt new systems for the land without abandoning the sheep which had served them well down the generations.

A drystone wall was constructed, above the high water line around the complete circumference of the island, and completed in 1832. The sheep were then confined to the seaward side. Here they have remained save for a few months each year when ewes and lambs are brought inland to graze.

The native sheep of North Ronaldsay are the only domesticated sheep still to be managed under a communal system of farming in which key events in the shepherding calendar bring together the whole community. At such times the island workforce gathers the sheep on the foreshore into drystone enclosures known as punds (pounds) and traditionally, this process of ‘punding’ occurs three times in each year: in June or July for shearing; at New Year to select for market and in February to ‘score’ or carry out a head count. North Ronaldsay sheep belong to the ancient northern short-tailed group of breeds and bones of similar animals dating from the Neolithic have been found at Skara Brae. A genotype survey organised by the Rare Breeds Survival Trust in 2009 demonstrated that the breed survives virtually unchanged from that original type. So, this living link with our past has established its place in history, survived to take its place in contemporary society and now carries forward a vital genetic blueprint as one of the early building blocks in man’s relationship with farmed animals. As such, the significance of this small hardy little sheep extends far beyond the shores of its native isle.